Experience shows that nothing is more ridiculous and silly than to compare little things with great, or to put them on a footing. The ridiculous folly of vain and proud mortals consists exactly in their wanting to expand themselves, like the frog in the fable, which would fain be as big as an ox, puffing itself up to a degree of bursting asunder. The comparison of very unequal things, or of little and great together, is a very plentiful source of the ridiculous. Now as a jest is the representation of the ridiculous; from this also we may conceive why it is a beauty in a jest to compare, in an ingenious manner, very unequal things together: which may be done two ways. First, by comparing great things with small, to render the former ridiculous. And secondly, by comparing small things with great, to make the small ridiculous. In the first case great caution is necessary. To make great things ridiculous, is often a criminal wantonness. And to put things on a footing with little, may often be the effect of stupidity, ignorance, clownishess and impudence. The clown, who asked, “whether the King was as great a man as his Lord”, put a ridiculous question, but it was the result of great stupidity. Nay, as great things become equal to small, upon separating from them that by which they exceed the small in magnitude, the ridicule in making such a comparison, will oftentimes not hold. But on comparing small things with great, in an ingenious manner, to make the small ridiculous, and the great lose nothing of their worth and prerogative, neither stupidity nor wantonness is betrayed; and the absurdity is so observable therein, as necessarily to fall into the ridiculous. Ausonius affords us an example, Epigram 95, where he relates the adventures of Faustulus, riding on an ant, which flung the unhappy Faustulus, and gave him so violent a kick as to kill him, and in the pangs of death he was able only to say by way of consolation, that his fall was as great as Phaeton’s:

Which infinitely exceeds that of Faustulus: and therefore it is evident that the ridiculous in the words of the latter arises from the vast disproportion between both cases. 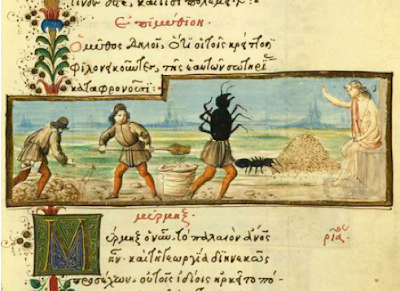 Feeling antsy? (From The Medici Aesop; source: BestiariaLatinaBlog, image in the public domain)

No objects, to speak comparatively, so greatly differ as things opposite and contradictory to each other. Things, thus opposite, have so far nothing common. It is therefore evident from what I before observed, that, if in a jest, opposite and contradictory objects are, in an ingenious manner, mutually combined and compared, it acquires great beauty. This comparison of mutually opposite things proves a rich source of the ridiculous. And therefore such jests are generally to be met with in satirical ironical writing. The Duke of Osuna, on a great festival, went on board the King of Spain’s Galley’s, in order to release, in virtue of the privilege he enjoyed, one galley-slave. After having asked many of them the reasons of their condemnation, and what they had been guilty of, they all wanted to justify themselves, and to persuade the Duke that they suffered unjustly, except one only, who very frankly owned all his faults. “Turn out this villain”, says the Duke in releasing him, “from among these honest fellows, lest he should debauch them.” The whole of this jest is founded on an irony, and on the combination of things contradictory.

From what we have hitherto dicussed, there flows a remark concerning jests in general, and which may also be proved from other principles besides: namely, that a man of great wit, and little acumen, or penetration, can never succeed in jesting. Such a man proves always intolerable, with his facetious conceits, to judicious persons. His jests are merely playing on words, or puns, or allegorical, metaphorical and tropical modes of speech, and the like kinds of wit, without applying them with any acumen or penetration: and in that case he must fall into the insipid. Without acumen, a man cannot possibly guard against false thoughts: and if in jesting he thinks without acumen, he overlooks the differences of objects, and in that case may easily, by a false conceit, represent to himself a coincidence in things which greatly differ. Now as I have hitherto shown that the objects, to be mutually compared in a jest, must be very different; but this rule not being possible to be observed without a degree of acumen, as being that very faculty, by which we discover the differences of things; so it is evident that each witty conceit is not to be deemed a jest; but we are, moreover, to enquire, whether the wit, in the production thereof, was duly supported by the acumen or penetration. And hence also I have defined a jest, a thought produced both by the wit and acumen combined. And we may always observe that persons of no great understanding are also devoid of the necessary acumen; such as very young persons, and people advanced, indeed, in years, but children in understanding; these may have a great deal of wit, and for that reason an uncommon turn for drollery; but yet be incapable to jest happily, only because they are without acumen. It is evident from other principles that a person devoid of acumen cannot possibly have a good taste: and thus also for the same reason want of acumen causes the want of the gift to jest.

Georg Friedrich Meier (1718-1777) was a German Enlightenment philosopher. A pupil of Alexander Gottlieb Baumgarten, he succeeded his teacher as extraordinary professor, and subsequently became a full professor at the University of Halle in 1748. The text above has been reproduced, with minor modifications of the spelling and translation, from The Merry Philosopher; or, Thoughts on Jesting (London 1764).